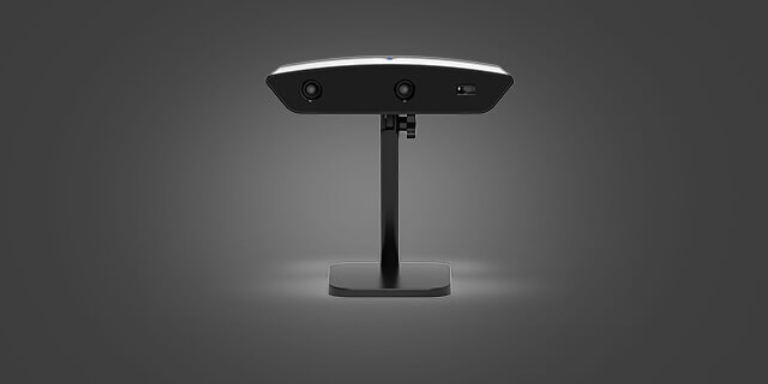 A 3D scanner is an imaging device that captures real-world object or environment to collect data on its shape and appearance (e.g. color). The captured data containing three-dimensional information can be used to create digital 3D models which are applicable to a wide array of cases such as reverse engineering, quality inspection, facial recognition and AR games.

3D scanners can be classified into several types with regard to design, scanning technologies and applications. From the perspective of design, in this article we will introduce two types of 3D scanners and their features. In this respect, 3D scanners are generally categorized into handheld 3D scanners and stationary 3D scanners.

Stationary 3D scanners, or fixed 3D scanners, are either mounted to an arm or a tripod and often fixed and placed at a location, for example, on a desktop or on the ground. Desktop 3D scanners are relatively smaller in volume and often scan small to medium-sized objects. They usually come with a turntable on which the object is positioned and rotated to be captured from all angles. Other stationary 3D scanners are mounted onto a longer and larger tripod and placed on the ground like professional video cameras, and they are capable of scanning lager-sized objects compared with desktop 3D scanners and usually belong to the industrial-grade scanners, for example ATOS Compact Scan from GOM.

Whether for handheld scanners or the stationary type, most 3D scanners on the market need to be connected to a computer, resulting in multiple cable setup. Tanso S1 from Revopoint is currently the only Android tablet scanner on the market that operates without a computer or a cable due to its powerful embedded computing capacity. As for the cost, the price of 3D scanners can range from hundreds of dollars to tens of thousands of dollars depending on the performance.