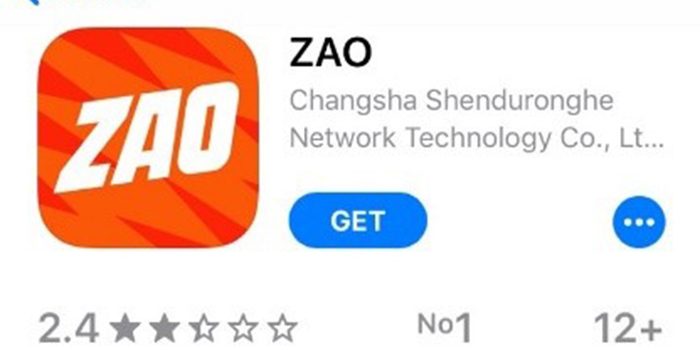 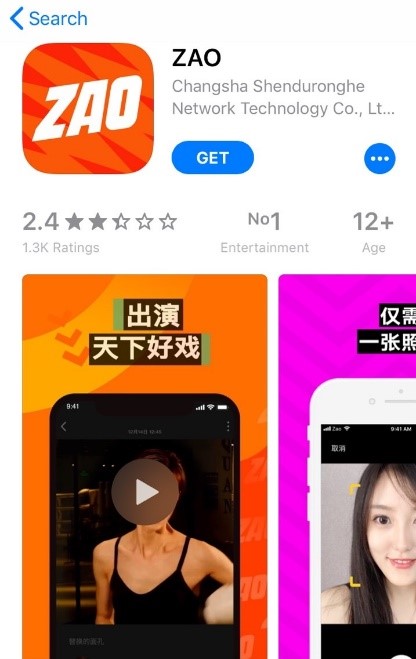 On August 31st, an app called ZAO unexpectedly rocketed to the top of the download chart of China’s iOS app store. Last weekend, on WeChat, China’s most popular social network, people were amazed to see their friend’s faces in movies, TV shows and memes and couldn’t help having a try themselves. ZAO is a face swapping app that can place anyone’s face in short videos only by uploading a selfie. Some users place their faces in popular movie scenes like Titanic and The Big Bang Theory, enjoying being a super star or interacting with their idols.

Twitter user Allan Xia posted that Zao is the “best application of Deepfake-style AI facial replacement” he has ever seen and demonstrated his likeness in Leonardo DiCaprio generated in “under 8 seconds” from one photo. But some find the result not so desirable, in this case, users may be asked to follow on-screen prompts, such as blinking their eyes and opening their mouths to create a more realistic and seamless image. 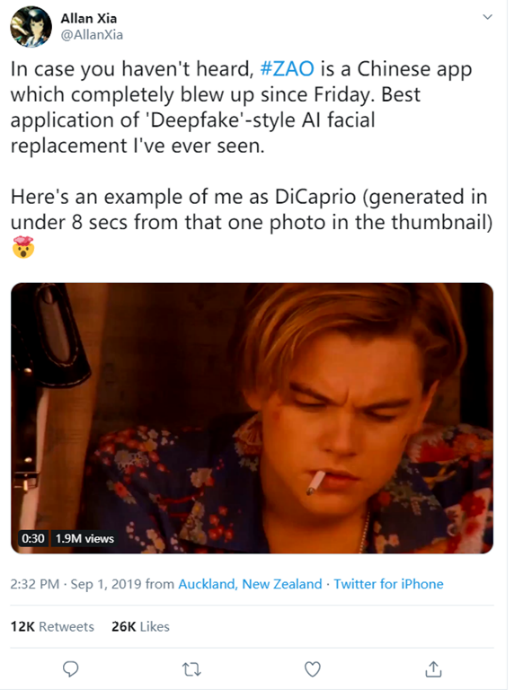 Like other facial recognition producsts hit in recent years, for example, the Deepfake video of Barack Obama saying things he never said and FaceAPP that creates an elderly version of users with its old-age filter, privacy controversies quickly creep in and alert users and the media. Just one day after the rocketing download, negative reviews bombarded the app store listing. To use ZAO, users have to accept the privacy policy which includes a clause saying that its developer gets a “free, irrevocable, permanent, transferable, and relicense-able” license to all user-generated content, according to Bloomberg. Many people are worried that their personal information and photos will be hacked to create fake identities, posing a potential threat to mobile payment verification systems.

Though such concerns have existed for a long time, face recognition payment is an unstoppable mainstream in China. Biometric characteristics are often used in 3D face recognition, based on behavioral and biological characteristics. Backed up by powerful hardware and software, face features are positioned and tracked when people are asked to blink their eyes, open mouths or nod. This could help defend against the threat of swapped faces or 3D face models. Compared with 2D photos, 3D face data is able to be identified even in dim light conditions. The identification success rate is much higher than 2D photos in case of different hairstyles, makeup, or weight gain or loss.

At present, major 3D face recognition technologies include 3D structured light, TOF and binocular stereo vision. High-end as the technologies are, they are mature enough to enter the market at a relatively low cost. Revopoint is an emerging American company, specialized in 3D cameras. Acusense, its latest structured light depth camera offers accuracy up to 0.1mm, and outputs 8-megapixel RGB image at a frame rate of 15 frames per second. The high accuracy and resolution make Acusense a reliable tool to identify faces and screening out fake data.